BAG
(
0
)
YOUR  PRESENT  BAG
No items found.
Product is not available in this quantity.
STORY

My Dojo
Dennis Freischlad in India

Dennis Freischlad is a poet and writer and has written extensively about India. Since 18 years he is partly living in Pondicherry and Auroville, which he considers his actual home in this world.

Since his 20th birthday Dennis Freischlad continuously travels the planet, living mainly in between India and Cologne. He rejected a university career and instead rode his motorcycle through India, worked as a cooking assistant in Palestine, lived with shamans in Santiago de Cuba, meditated for a year with Buddhist monks in Sri Lanka and climbed Indonesia’s highest volcanoes.

His travel literature books are, alongside his essays and poems, mainly published by DuMont in Germany. His book on India, „Die Suche nach Indien“ became a criticly acclaimed bestseller. He continues to write and report about India on his blog thevacantindian.blog. 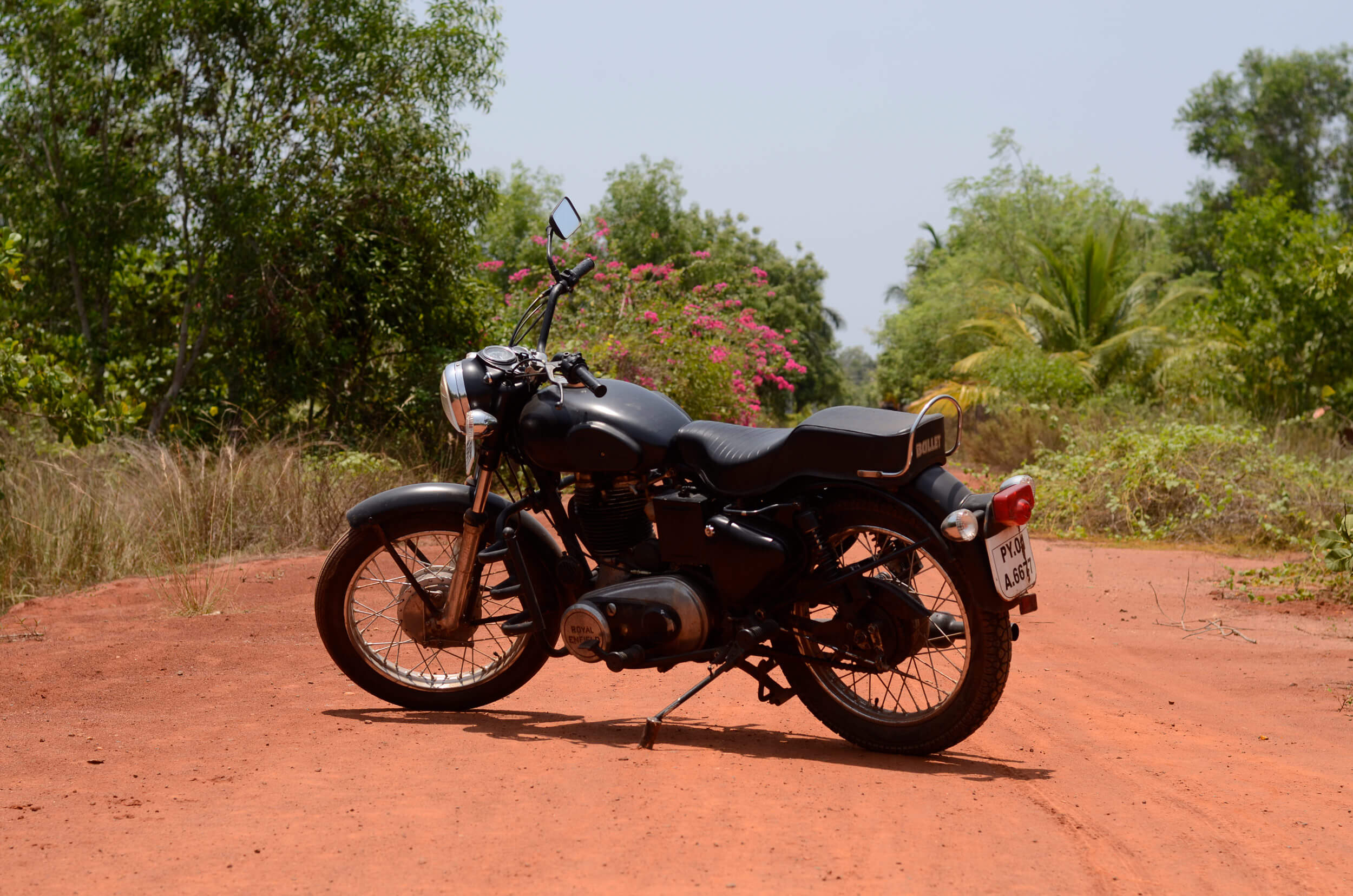 In the mornings we are free to leave the house and get our essentials – food, medicine etc. Since I consider driving my bike to be essential as well, I use these times to roam around and just drive. Motorcycling, in its essence, is the desire to detach from the world and, more importantly, from oneself. Thus, it can be compared to activities of similar depth, namely meditation, sex, psychoactive drugs etc. When we departure blindly and embark on a jorney without a specific aim, driving itself becomes everything. Ultimately, it´s all about the promise of not having to arrive anywhere at all.

Only a Motorcycle allows us to be driven while simultanously being in the driver's seat. Here, we are not shielded nor sucked in by the world which is simply flashing by our senses. Our self is present, the mind is thoroughly awake and alert. While being fully emerged in the outer world and the experience of speed, earth and sky, we are also in sync with our innermost reality.

My drifting is writing. On the bike, the opening lines of poems and other revelations, linked to a eternal rthythm and sound, simply trickle into my consciousness. I don’t think about them. They simply arrive. Or more specifly: Through driving, my mind is able to open up to their ever existing realities. It´s like meditation, in which the practisioner, roughly speaking, is silencing his or her own self, allowing for a self-less consciousness to emerge and to be witnessed.

A wider world suddenly rests upon us and dares to speak. In order not to loose the “incoming” words and stanzas which flow so naturally into the realms of my consciousness, I never drive without a small recording device in my pocket. 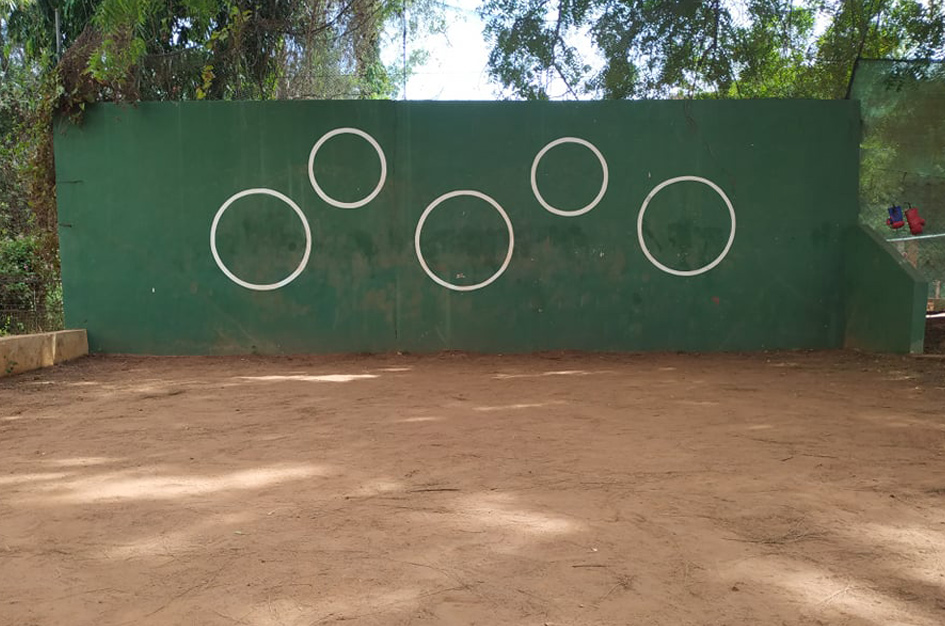 Since our Gym is closed, we moved on onto a sand pitch under the open sky. And since we can't train any Jiu Jitsu or Wrestling without decent mats, we only train stand-up striking for the past two months. Nothing keeps me more sane then this early morning exercise. I wake up at seven, whether I want to or not. We train from 8 to 9.30 in a tropical humid summer fuck up which extracts all the water out of your body.

After practise, the worst and hardest part of my day is done. Thus, at 9.30am, I already experience a sense of accomplishment which fuels further discipline for the rest of the day. The body is aching and exhausted, but the mind is calm. My writing work is being resumed in a peaceful state of mind. I could never understand writers who don’t do sports or any physical exercise. If theres one thing that help my creativity, its this sweet island in every day when I don’t think about writing or my projects at all. It´s a necessary reset button. Who would have thought that being kicked and punched in the face has such amazing results! 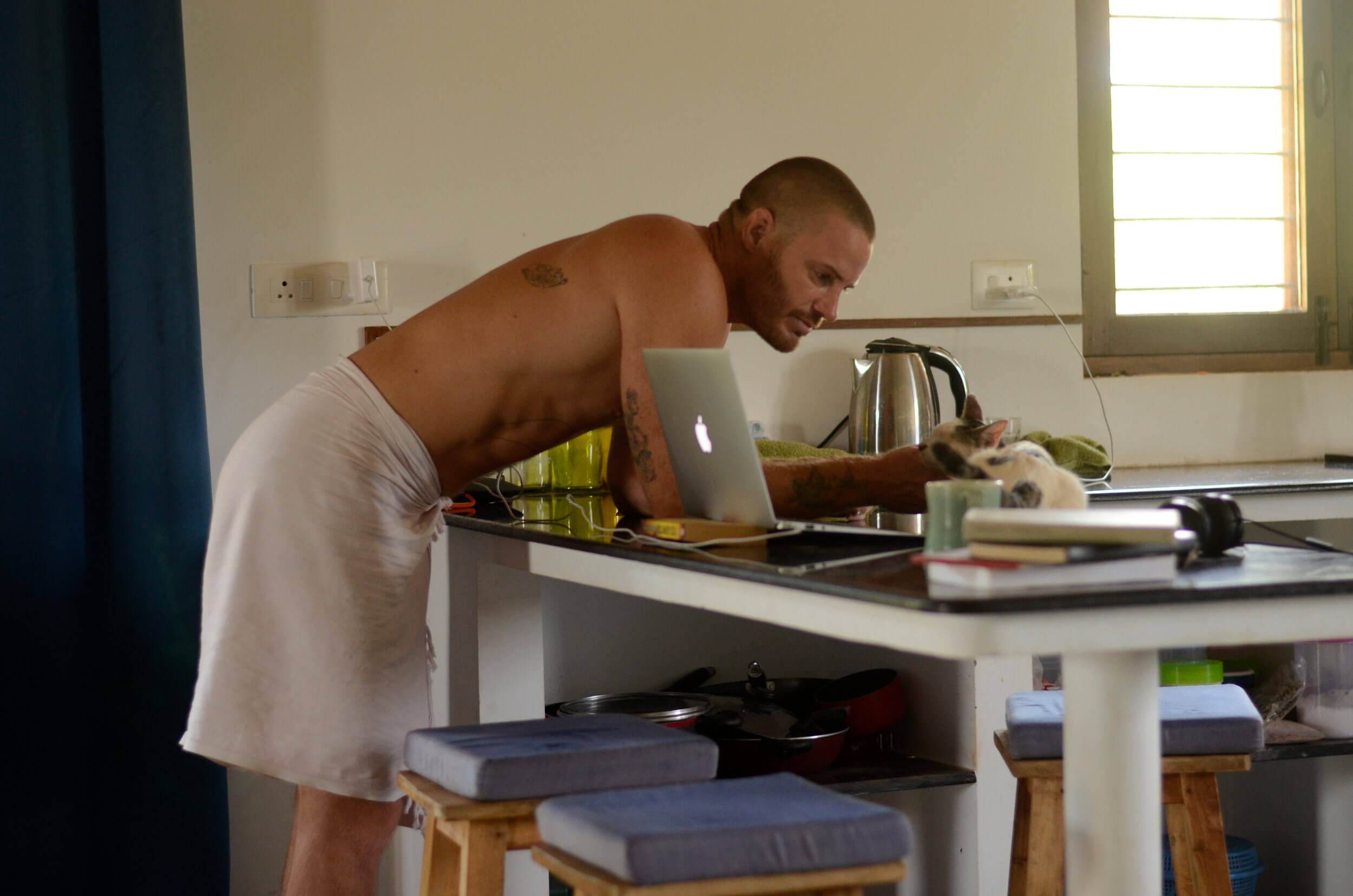 This is where I write.

If I don’t feel like working but yet need to work, I sometimes trick myself by lying down comfortably on the couch/bed. Often it helps. Once I am away from the desk, a part of me changes to a more free flowin state. For some reason, there is less pressure. Its beautiful to fool your own mind. I always know when I come to the end of writing a book when I found myself much more working in bed.

The very evening before the lockdown started, I was standing in my garden making a phone call. Suddenly, I could feel something on my feet. It was a cat strolling around my legs. I gave her some joghurt. She stayed. I fed her more. She stayed and made my house our home. Her arrival was a blessing. I am used to be and to live alone, but I know that without her I would have gotten lonely during this lockdown. Since she came for a co-living in Covid times, I named her Covida. After three weeks, I wondered whether she was pregnant. She rested in differnet and strange places around the house and seemed to have gained some weight, but maybe she was just getting fatter from the Whiskas and the Milk. Five days after my first suspicion, she gave birth to four kittens in the early morning. I am sleeping outside on the roof. She came up to me for her delivery and made sure that I was awake. Now, they are already a month old and more than alive. Its exciting to have them around, watch them grow and to have somebody happily waiting for you when you return home. Without their company, I definetly would have missed the company of living and sentient beings much more! 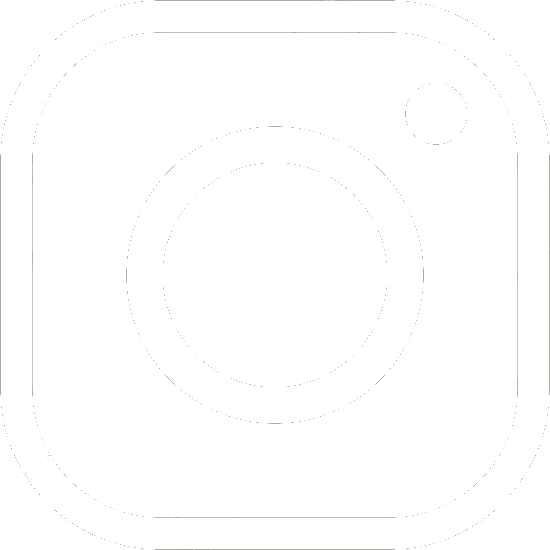 Become a Member and grow with our community (upcoming)

Subscribe to our free Newsletter for input on life, work and culture:
Thank you! Your submission has been received!
Oops! Something went wrong while submitting the form.
Celebrating the Bliss and Battles of Living and Making Today.
Present’s mission is to inspire starting by producing stories from around the world on creating, discipline and self-care, through the lens of makers and creators of today.
©PRESENT is edited, designed and developed by Hugo Hoppmann in Berlin © 2022
◼ Start Here
◼ Manifesto
◼ Archive
◼ Tracker
◼ STORE
Contact us at info@present.xxx or send a direct message.
Imprint & Datenschutz